Oh no!  Where are the candidates?  Don't worry, the Maricopa County candidates have been moved to HERE

On August 18, 2020, President Donald J. Trump issued a presidential "Proclamation on 100th Anniversary of the Ratification of the Nineteenth Amendment." Click HERE to read and HERE to watch the White House ceremony.

100th Anniversary of Votes for Women

The Maricopa County Republican Committee joins the country in celebrating August 26, 1920, Centennial of the Ratification of the 19th Amendment to the United States Constitution proclaiming the right of women to vote. We are privileged to honor the countless women who held fast to their vision as they worked without ceasing year after year to see that vision finally achieved.

As we recall the unbelievable personal sacrifices made: the costs to self and family of public rejection and scorn, inhumane treatment in jails and prisons, and loss of homes and personal belongings, we salute these American heroes whose love of liberty sustained their commitment to take personal responsibility for securing for women guarantees of equality and freedom as contained in the Constitution of our United States.

Our celebration of their bravery and dedication is an important time to celebrate our Republican Party’s policies, historically as well as present-day, in support of women in leadership and in issues of equality.

Susan B. Anthony enlists the support of a Republican Senator who introduces into Congress the 19th Amendment to the U.S. Constitution giving women the right to vote.

The first equal rights of women plank carried in any major political party platform is contained in the Republican Party Platform.

The first act of Congress after a Republican majority was regained was the passage of the 19th Amendment.

When the 19th Amendment was finally submitted to the States for ratification, 26 of the 36 States that ultimately ratified it had Republican legislatures.

Of the nine states that voted against it, eight were Democrat.

Not waiting for the rest of the country to act on such an important issue, when the

Our celebration of this, the Centennial of the Ratification of the 19th Amendment, increases in importance as we celebrate the continuing pro-women policies and of our Republican Party:

The first woman mayor of a major city, Seattle, was a Republican woman.

The Republican Party becomes the first major political Party to endorse an equal rights amendment for women in its platform.

The first woman to hold a high position in a presidential election campaign is a Republican.

The Republican Party is the first to appoint a U.S. ambassador to a major power: Italy.

For the first time in the history of any political convention, a Republican woman serves as the director of the convention.

Republican Margaret Chase Smith is the first woman to serve in both the House and the Senate.

The first woman to have her name placed in nomination for the U.S. Presidency by either of the two major political Parties is a Republican woman.

The first woman to be elected State Party Chairman of any major political Party is a Republican.

The first woman to be elected to the U.S. Senate without her husband first preceding her or without first being appointed to fill an unexpired term is a Republican woman.

The first female head of the Commodity Futures Trading Commission is a Republican woman.

The first woman high commissioner of the U.S. Territories is Republican.

Republicans elect the youngest woman ever elected to Congress.

The first female veteran to serve in the U.S. Senate is a Republican.

Members of the Maricopa County Republican Committee are proud, as history proves that we, as Republicans, have long championed, with respect and energy, the rights of women and women in leadership. 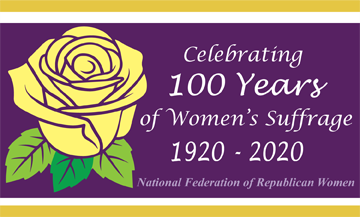